On December 8, 1923, Tau Kappa became the first addition to Phi Gamma Delta north of the border making it an international fraternity. The trend setter for Canadian expansion.

There is a long and distinguished history of our Canadian chapters more of which you will read about as the 100th anniversary approaches.

Let’s revel in fraternal friendship in “Not For College Days Alone”. PERGE and PERSISTENCE!

Looking forward to seeing you at the Pig Dinner and the Gala!

Damn proud to be a Canadian Fiji

Might the first 100th anniversary of Phi Gamma Delta in Canada have been well before Tau Kappa’s celebration in 2023? Read on.

The first Canadian chapter in Phi Gamma Delta was at the University of Toronto but only because of a number of factors philosophically and fraternally.

A group of men at McGill petitioned the fraternity for admission to Phi Gamma Delta in 1907 and 1909. However, the Petition was circulated to the four closest chapters and Union and Dartmouth immediately said “No” so the votes of Syracuse and Cornell were unnecessary because a majority of those chapters were needed for acceptance.

Another factor came into play which was an anti-expansion movement by a strong group in the fraternity. The rationale was the dilution of the fraternity ideals, etc etc. A position I found and find hard to understand. One brother wrote about the McGill petition that McGill and Quebec were foreign in every sense of the word and would not understand American College Life. I cannot say with certainty that there was an anti-Canadian sentiment though even though I am usually looking for that.

Next time, I will tell you about a watershed letter in 1910 that eventually paved the way for Tau Kappa but killed a McGill bid until 1948.

Damn proud to be a Canadian Fiji

But, where did Phi Sigma Tau come from?

In a letter of May 23, 1910, Alan Maynard Clark, Section Chief of Section III, wrote to Thomas Pogue, Archon Secretary, about the Toronto petition. The following tells the story in the words of 1910 –

“I have today written Mr Sills at Toronto, the man who is heading the Toronto crowd, and have stated to him plainly, that he must not expect that a petition could be granted this summer, but, as a suggestion, I have urged that his crowd get together and form themselves into a local Society, and make arrangements for a Chapter House, and that they send a delegation of three to five men to the Ekklesia, open up headquarters, so as to give such information about themselves and their college to the visiting delegates, as might be desired, and further, that they at once fill out and send a petition, which, although it could not be acted upon at this time would be evidence that they were seeking to come into Phi Gamma Delta………”

Hence, Phi Sigma Tau, which had actually been formed in 1907, was the fraternal organization that eventually became Tau Kappa. But a bit of drama almost took that off the rails.

The last history teaser told you about Alan Maynard Clark, Section Chief of Section III, who wrote in 1910 that the Toronto “crowd” should get together and form themselves into a local association and make arrangements for a chapter house, etc.

Well, the Toronto “crowd” was well ahead of this recommendation because, in 1907, Phi Sigma Tau was founded at the University of Toronto.

Thirteen undergraduate engineers constituted the first active chapter and, hence, the thirteen rays emanating from the central diamond on the fraternity badge.

The original intent was to petition, eventually, some national fraternity for a charter but, for the immediate present, the engineers decided to concentrate their efforts for several years in laying sound foundations upon which future chapters might build. Phi Sigma Tau was well in its way to petition Phi Gamma Delta but the German Kaiser had other ideas on the course of the next few years of history.

Next time, the war years.

Teaser #5
The assassination of Archduke Ferdinand in Sarajevo in 1914 sparked the beginning of the Great War, the War to End All Wars, World War I. Little did the world know that the hope that war would be banished forever was just a dream.

When Britain declared war, she did so for Canada too, as Canada was still a colony under British international rule. The men of Phi Sigma Tau answered the call to arms. War fervour and nationalism spurred at least 24 fraternity men to sign up. The chapter managed to struggle through the academic session of 1914-1915 and through part of the 1915-1916 session. However, like the other fraternities at the University of Toronto, in the spring of 1916, Phi Sigma Tau was forced to relinquish her house and cease active operations because of so many active and graduate members enlisting for active duty overseas. In fact, the entire group of three freshmen initiates signed up immediately.

Hutchinson writes that three fraternity Brothers were killed in action with one of the founders drowned in the Mediterranean on a torpedoed ship. A dozen or more were wounded one or more times and several permanently disabled.

Next time, picking up the pieces of Phi Sigma Tau after WWI.

Phi Sigma Tau regrouped after the War to End All Wars thanks to help from an active alumni and 6 Brothers who returned from the service.

Storage charges had been piling up on the house furnishings but a new chapter house was rented, the furnishings regained and supplemented. The first year was difficult but, within two years, the chapter found itself to be most firmly re-established. The Brothers decided to discuss the future of Phi Sigma Tau.

Hutchinson’s history next has this amazing paragraph that astounds me looking back to 1919 – 1920.

“At first, it’s members flirted – as they had flirted once before the war – with the idea of establishing a Canadian national fraternity but that project was dismissed as being rather impractical and inopportune. Meanwhile, some of the members felt very strongly that Phi Sigma Tau should become affiliated with some national fraternity……”.

When we finished the last piece of history, the Brothers of Phi Sigma Tau decided to affiliate with a national fraternity.

After thorough consideration, the active chapter at first decided to refuse to endorse the principle of petitioning any national or international fraternity. However, after more and lengthy keen debate, the chapter finally did resolve by a fair majority to petition only one fraternity- Phi Gamma Delta! But only after it had been “concurred “ by a poll of the alumni. The result was that when the alumni vote was completed in January of 1923 from graduates across Canada, the United States and Europe, it was found to be practically unanimous in favour of petitioning Phi Gamma Delta.

But hold on! Before the lengthy alumni vote was completed, Phi Sigma Tau was visited by the travelling secretary of Alpha Delta Phi who was invited to see the chapter on the invitation of some prominent and well- known Fijis who felt that there should be no longer a delay in carrying out the Phi Gamma Delta project of extending into Canada. They approached the Alpha Delta Phi Secretary, who happened to be a Toronto graduate, to see if there was a local group worthy to petition Phi Gamma Delta. Hutchinson’s history doesn’t tell us how the group got an Alpha Delt to visit with a view to investigating a possible petition to Phi Gamma Delta. Alpha Delta Phi had been established at the University of Toronto in 1893 so it seems that brotherhood and fraternal connections extended across different fraternities. It’s obvious that, beyond the Phi Sigma Tau alumni vote itself, concerted efforts by Toronto graduate Fijis to get the local chapter into the Fiji realm were very active. But, if the Alpha Delt did not approve of Phi Sigma Tau, might he have looked elsewhere? A piece of history that we will never know. And we’re thankful for that!

In the last history piece, the Phi Sigma Tau active chapter and a large majority of alumni agreed to petition Phi Gamma Delta for a charter. They even had help from Fiji grads in Toronto from other chapters.

Before the final completion of the vote tally however, in December, 1922, Phi Sigma Tau was visited by a group of 10 Fijis representing the Allegheny, Colgate, Cornell, Syracuse and Union active chapters and the Buffalo Graduate Chapter. In January, 1923, the Section Chiefs of Sections III and VI, Brothers Willard T. Pangson and Roland A. McCrady came to meet the chapter.

As a result of these visits, Phi Sigma Tau’s petition received the prompt and hearty support of the Allegheny Chapter, the chapters of Section III and the Section Chiefs of Sections III and VI. The Prospectus was prepared and issued and in September of 1923 a delegation of four actives and two alumni went to the 75th Ekklesia in Pittsburgh to petition for a Charter. And so it was done.

Hutchinson makes note of Phi Sigma Tau’s “preceptor and sponsor” – O. H. Shenstone (Dartmouth ‘10, MIT ‘11). This is a name that every Tau Kappa Fiji knows with affection and thanks.

Hutchinson ends his history with these words:

Check out the International Archives at: https://www.phigamarchives.org/ 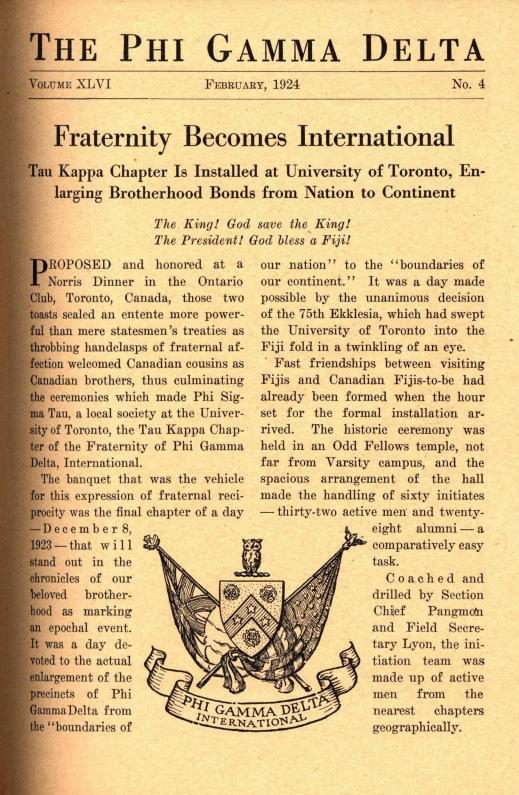